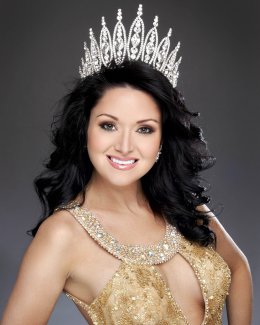 Laine Berry captured the title of Mrs. International® at the 21st annual pageant at the Skokie Performing Arts Center in Chicago Illinois on the eve of her 12th wedding anniversary.  Her husband, Kevin, was honored to crown his wife at the end of the competition featuring 47 of the worlds most beautiful and accomplished women.

Laine is a 20 year resident of the state of Arkansas, where she and her husband are the co-owners of Adworks Concepts and Design, a full service multi-national advertising agency.  A 1995 graduate of the University of Central Arkansas, Laine utilizes her degree in Communications to advance the life saving message of Women’s Heart Disease Education and Awareness.

Cardiovascular Disease kills almost 500,000 American women a year. Laine and her mother, Cheryl Hatfield, were almost part of that terrifying statistic, when in 2000 Cheryl underwent triple bypass surgery, and Laine was diagnosed with Wolff-Parkinson-White syndrome. WPW is an abnormality of the rhythm of the heart, and if left untreated is life threatening.   That year Laine founded “Taking Wellness to Heart”, a 501(c)3 focused on educating women to the dangers they face from heart disease.  Laine became a volunteer with the American Heart Association, and over the last 8 years has served as a spokesperson and lobbyist for the organization. She was a member of the Heartland Affiliates “Go Red for Women” initialization action committee, and was asked to introduce “Go Red for Women” to the Arkansas Legislature in 2003.

Laine has been a participant in the authoring and passage of the 2003 BMI Bill, the 2005 Arkansas Clean Indoor Air Act, and the 2007 AED Bill. Laine serves on the American Heart Associations state legislative advocacy committee, and as chairman for the You’re The Cure advocacy campaign.  Laine was named the 2005 “Arkansas Community Hero” for her efforts on behalf of women’s heart health. Over the last eight years Laine has traveled the nation spreading the life saving message of women’s heart disease education and awareness.  The Berry’s' were honored to serve on the board of directors for the 2008 Arkansas Heart Ball, which raised 1.1 million dollars for the American Heart Association, and their efforts continue for the 2009 event.  Laine is thrilled to spend her year as Mrs. International® as a national ambassador for the Go Red for Women campaign, and hopes to help solidify the relationship between the Mrs. International® system and the American Heart Association.  Laine believes that in choosing Go Red for Women as it’s national platform the Mrs. International® family of pageants will make a real contribution to the AHA’s 2010 impact goal of reducing death by heart disease and stroke by 25%.

After dealing with the heartbreaking reality of infertility the Berry’s’ founded and run “Embracing Your Infertility” support group, which focuses it’s efforts on outreach and support for couples newly diagnosed and learning to cope with the condition.  Laine authored Embracing Your Infertility; Finding Joy in the Diagnosis, as a guide for couples dealing with the physiological and physical hardships associated with the diagnosis.

Laine’s passion for the well being of children is also seen in her service on the speaker’s board for “A Bookcase for Every Child.”  This program ensures that children in underprivileged environments are exposed to literature from a young age.  Children enrolled in the “bookcase project” receive a personalized bookcase with a large collection of books, all at no charge to the child.

Laine and Kevin are honored to devote a year in service to the Mrs. International® title, and look forward to seeing what blessings God brings in the process.  They ask that you visit the following websites to see how you can make an impact in the world around you.

The 2019 Mrs. International Magazine
Learn all about the 2019 competition

Paying For Contestant Fees?
Sponsor a Contestant or pay for your contestant fees...

Don't miss out on news from the International Pageant!